Home News Mobile Nokia 8 Launched: Specifications, Price and Availability
Facebook
Twitter
Pinterest
WhatsApp
Finally, the much awaited Nokia 8 Android smartphone launched here at an event in London. It is the third in a series also the flagship device of the company. The design of the handset is in line with what we shared last month. The other two smartphones, the Nokia 3 and Nokia 6 has already been launched a couple of months ago.

The highlight of Nokia 8 smartphone is its cameras, which is the result of the partnership between HMD Global and Carl Zeiss. The handset has been given IP54 rating making it water resistant and it is packed in 6000-series aluminum case. 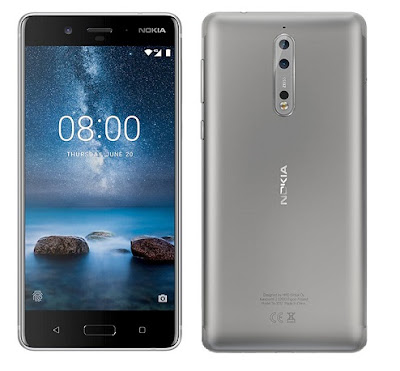 Being an Android flagship smartphone of HMD Global, the Nokia 8 packs some powerful specifications and as mentioned earlier, the highlight of the phone is its cameras, a dual 13-megapixel shooter at the rear and the same resolution single camera on the front.

ALSO READ:  Lenovo Flex 3i and Flex 5i Are Affordable Chromebooks

Both, the front and rear cameras are capable of capturing images and videos at the same time, which is a new feature called Dual-Sight mode that sets apart the Nokia 8 with other phones in the market equipped with a dual-camera setup.

To prevent heating of the device, the Nokia 8 comes with unique heat management solution which Juho Sarvikas, Chief Product Officer, HMD Global explained as “the Nokia 8 is fitted with an elaborate heat management solution: a copper pipe that runs from the upper right corner of the device to the lower left has liquid evaporating in the middle and condensing on the edges. A graphite shield enables heat transfer to the aluminum unibody and its eventual dissipation to the air.“ 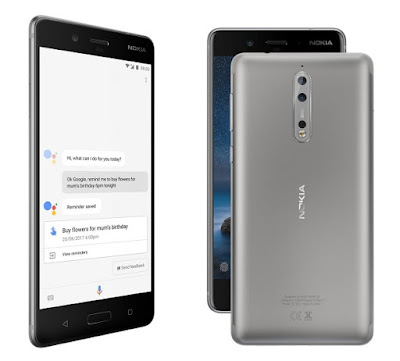 There is a Qualcomm Snapdragon 835 chipset that powers the device paired with 4GB of RAM and 64GB of inbuilt storage which is expandable via microSD cards of up to 256GB. The smartphone will be launched in both single SIM and hybrid dual SIM variants, depending upon the markets.

Other specifications include a 3090mAh battery, a 5.3-inch 2K LCD screen protected with Corning Gorilla Glass 5, USB 3.1 Type-C port along with a 3.5mm headphone jack.

Price and Availability of Nokia 8

In the international market, the Nokia 8 will be available in early September, priced at an equivalent of 599 euros ($703), while the handset will be made available in India in early October. There is no price tag given for the Indian market, but it will be known closer to launch.