Home News Airtel’s New Plan of Rs 93 Offers 28 Days of Unlimited Calls...
Facebook
Twitter
Pinterest
WhatsApp
Jio’s 98-rupee plan proved to be the cheapest plan offering a month-long validity launched as a Republic Day Offer. In the fight to offer cheap call and data plan, Airtel has updated the validity of its plan of Rs 93 to 28 days keeping the user focused on voice services. 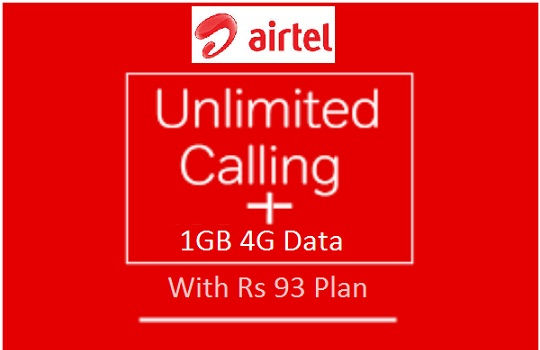 Initially, the validity was just 10 days. Now Airtel is going to compete with Jio targeting the users who have more calling priority than data. Prior to that, Airtel was giving 1 GB data every day for 28 days in the recharge of Rs. 149.
In Airtel’s Rs 93 plan, unlimited local and STD calls are offered to the user, free calls on roaming, 100 SMS (daily) for 28 days. Users will also be able to enjoy the benefits of 1 GB 3G/4G data per day with this pack up to 28 days.
Also Read: Specifications of Xiaomi Mi 7 Surfaces Online, the phone to feature 8GB RAM

Point to keep in mind that the limit of unlimited calls will be 250 minutes per day and 1000 minutes per week. After the end of the calling limit, the user will be charged 10 paisa per call. Talking of bundled SMS, this limit is 300 in Jio Recharge, while Airtel is giving only 100 SMS per day.

Remember that telecom company Airtel had sold a prepaid recharge pack of 93 rupees in response to Reliance Jio’s Recharge Pack of Rs 98 in December last year. Then the validity of the pack of Rs 93 was for 10 days with the same profit.