Home News Mobile Nokia 1 With Android Oreo (Go edition) Launched
Facebook
Twitter
Pinterest
WhatsApp
Just before the Mobile World Congress in Barcelona, HMD Global launched the Nokia 1 smartphone. This is one of the first smartphones to come with Android Oreo (Go Edition). Hopefully, in the Mobile World Congress, more handsets will emerge. In the Android Go version, users also have a great experience in budget hardware.

Apps such as Gmail Go and Google Maps Go have been pre-installed. Another feature of this smartphone is the Express-on-Two-Tone Polycarbonate Exchangeable Cover. With this, users will be able to personalize the cover of their smartphone. It is clear that Nokia 1 is the cheapest smartphone of HMD Global. So far this was achieved by Nokia 2. 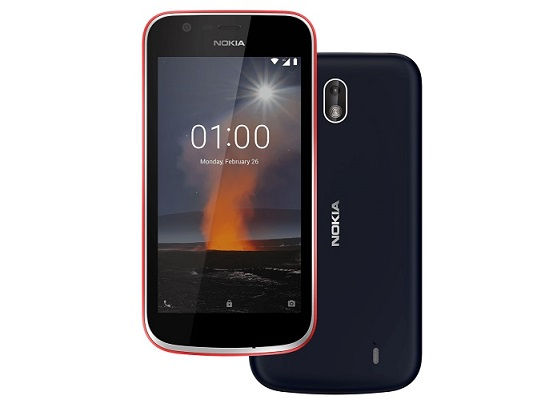 Price and availability of Nokia 1

Nokia 1 will cost $ 85 (about Rs 5,500). It does not include tax and subsidy. HMD Global has called it Global Average Retail Price. What will be the price of Nokia 1 in India? It’s not clear right now. The phone will be made available in dark Blue and warm Red colours from the beginning of April. On the other hand, the cost of the Express-on cover is $ 7.99 (about Rs 500). It will be available in Azure, Gray, Yellow and Pink colours.

Nokia 1 smartphone will run on Android 8.1 Oreo (Go Edition). It will have 4.5-inch FWVGA (480×854 pixels) IPS display. It has 1 GB RAM with 1.1 GHz quad-core MediaTek MT 6737 M Chipset. The phone has a fixed focus lens of 5-megapixels with LED flash. A fixed focus 2-megapixel camera is provided on the front panel.

In the Nokia event held in Barcelona, HMD Global also introduced Nokia 7 Plus smartphone along with Nokia 8 Sirocco and Nokia 6 (2018). These are all Android One smartphones. The company also launched a 4G VoLT feature phone named Nokia 8110.