Home News Mobile Nokia 7 Plus Smartphone Launched in MWC 2018: Price, Availability, Specifications
Facebook
Twitter
Pinterest
WhatsApp
The wait is over. The ‘Mahakumbh of Technology’ MWC 2018 brings many new smartphones. Today at the event, Nokia smartphone maker HMD Global has launched Nokia 7 Plus. It comes with the dual rear camera setup and a display with 18: 9 aspect ratios.

The statement given by the company in the launch event said that the Android One smartphone has been specially designed for ‘creators’. It has dual cameras at the rear like Nokia 7. The Zeiss Optics is used in the rear camera to improve the photography experience in low light. Like Nokia 8, it can be done by combining both cameras to perform ‘Bothie’. 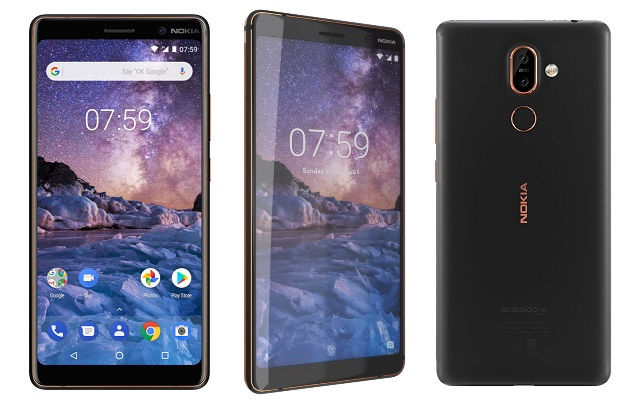 Price and Availability of Nokia 7 Plus

As we have already mentioned, this smartphone works on Android One. Its price in the international market is EUR 399 (roughly Rs. 31,750). However, nothing has been officially said about its price in India. It has been said that the smartphone will be available in India at the beginning of April.

ALSO READ:  Disney to Start Its Own Streaming Services, Plans to Quit Netflix

The phone will come in Black/Copper and White/Copper colour variants.

Features and Specifications of Nokia 7 Plus

Talking about the hardware, the phone is equipped with 8-core Qualcomm Snapdragon 660 processor and works on Android 8.0 Oreo. It sports a 6-inch full-HD+ (1080×2160 pixels) IPS screen with 18:9 aspect ratio. 4 GB LPDDR4 RAM has been given to improve the performance.

The company also promised to provide new updates from time to time. One of the smartphone’s specialities is its camera. Dual rear cameras have been used in the handset. A 12-megapixel wide angle is a primary camera, which is equipped with F/1.75 aperture, the other is the 13-megapixel camera, which has an aperture F2/.6.

There is also an option of 2x optical zoom added. Both cameras come with dual-tone LED flash and Zeiss Optics. The front camera is 16 megapixels, which is equipped with Focus F/2.0 aperture. Users will also be able to experience Zeiss Optics in the front camera.

The phone contains the accelerometer, ambient light sensor, digital compass, gyroscope, proximity sensor and fingerprint sensor in the rear. The phone will have 3 Mike and 1 speaker experience with smart amplifier and Nokia Spatial Audio. The handset has a battery of 3,800 mAh capacity. It has been claimed that once full charge, the user will have 19 hours of talk time and will be able to keep the phone on standby for 723 hours.