Home News Mobile Nokia 8810 4G Feature Phone Launched in MWC 2018, Equipped With VoLTE
Facebook
Twitter
Pinterest
WhatsApp
In the Mobile World Congress 2018, HMD Global also unveiled the Nokia 8810 4G phone along with the Nokia 1. The new feature phone is the new incarnation of the company’s old popular handset. In this also you will get a curved slider design which has become a signature design of the handset. 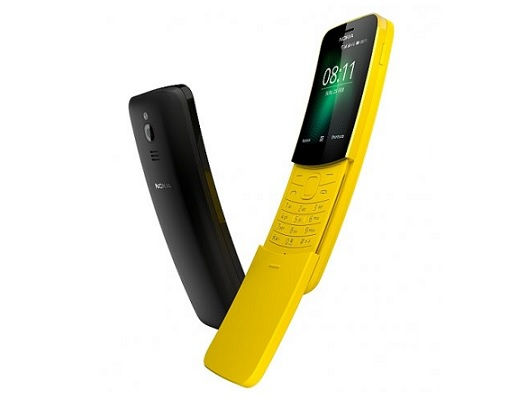 The new avatar has 4G VoLTE connectivity feature. It is clear that the company wants this phone to work as a backup phone. This smartphone runs on ‘Smart Feature OS’. The phone has access to Google Assistant, Google Search and Google Maps. This has been possible in partnership with HMD Global and Google. With Facebook and Twitter, these apps will become part of the phone. The popular snake game also has a new incarnation in it.

The Nokia 8110 4G feature phone costs 79 euros (around Rs 6,300). Tax and subsidies are not included in this and HMD Global says that this will be the average retail price of this handset. No information has been given about the Indian price of Nokia 8810 4G. This phone will be made available in traditional Black and Yellow colours from May.

Also Read: All You Need to Know About the Samsung Galaxy S9 and Galaxy S9+

Dual SIM (Micro + Nano) Nokia 8810 4G smartphone runs on feature OS, which is powered by KAI OS. It has a 2.45-inch QVGA (240×320 pixels) display, 1.1GHz dual-core Qualcomm Snapdragon 205 processor and 512 MB RAM. The rear camera is of 2 megapixels equipped with LED flash. There is no front camera. The smartphone has received an IP52 rating for dust and water resistance.