Home News Google Honoured ‘Chipko Movement’ by Creating Doodle on The 45th Anniversary
Facebook
Twitter
Pinterest
WhatsApp
Google’s special doodle today is reminiscent of ‘Chipko movement’. In fact, on Monday, the 45th anniversary of the ‘Chipko Movement’, which Google Doodle has depicted that movement of sacrifice through a picture. Chipko Andolan was a calm and effective movement, whose purpose was forest protection. 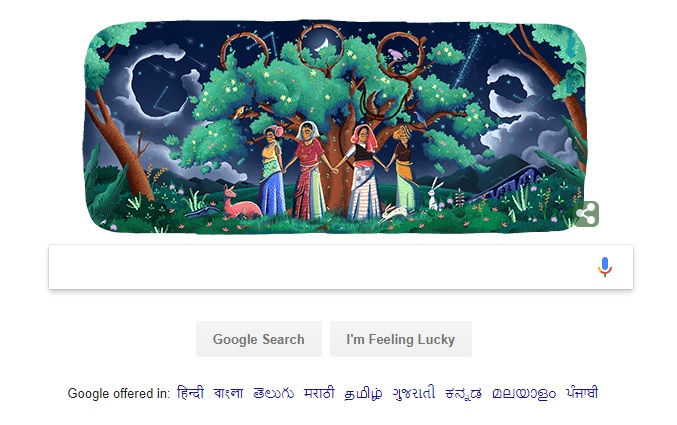 The movement started in the year 1970, in which people had decided that they would not cut trees. The people who participated in the Andalon grabbed the tree with their hands. The Chipko movement, shown in Google’s doodle, was a Gandhian movement, which was started to save the forests being bitten.

The foundation of movement laid down in Rajasthan. The people of Bishnoi community started taking the trees in arms. In fact, the order of cutting trees was given by the Maharaja of Jodhpur. After this, the campaign to preserve the trees in all Bishnoi villages has got a strong hold. In modern India, the Chipko movement was started from Uttarakhand’s Mandal village (then a part of Uttar Pradesh). This was the year 1973.

Later, the position of this movement increased in the areas connected to the Himalayas. The government started giving the forest land to the sports companies, which was strongly opposed. This step filled the people of the village with anger and stopped all the harvesting of trees. In the beginning, the Chipko movement was led by women, but Chand Chandi Prasad Bhatt and his NGO Dasholi Gram Swarajya Sangh took the lead.

In today’s issue of Google doodle, in detail, after the success of the Chipko movement in Uttar Pradesh, it spread to other parts of the country. Talking about the main faces of the Chipko movement, there are names like Dhoom Singh Negi, Bachni Devi, Gaura Devi and Sudesha Devi, inspired by Gandhian ideology, also gave direction to this movement. From his initiative, then Prime Minister Indira Gandhi banned tree cutting.

Google said on this occasion, “The Chipko Andolan also stands out as an eco-feminist movement. Women formed the nucleus of the movement, as the group most directly affected by the lack of firewood and drinking water caused by deforestation. The power of protest is an invaluable and powerful agent of social change. Take some time to hug your favourite tree-hugger in celebration of the Chipko movement!”