Home Reviews Mobile Reviews Redmi Note 5 Pro Review
Facebook
Twitter
Pinterest
WhatsApp
In 2017, the most important feature for many Android flagship smartphones was a very thin border screen (narrow bezel). Gradually, this feature became part of the mid-range phone, and now budget phones are also trying to woo customers on this special type of display. Infocus Vision 3 and Honor 9 Lite are just some of the options in the mid-range.

Xiaomi, which was the leading smartphone brand in 2017 in selling mid-range/budget smartphones has also turned towards the fullscreen display. Moving towards this trend, the company has launched the Redmi Note 5 Pro last month.

As mentioned earlier, Xiaomi was the top smartphone brand and its best-selling smartphone in 2017 was Redmi Note 4. Now in 2018, everyone was eyeing the Redmi Note 5 Pro and after the launch, we believe that this phone has done this responsibility very well.

The successor comes with a better camera and it’s also the first smartphone to be driven by Qualcomm’s new Snapdragon 636 processor. This chipset supports the full-HD+ display and has Qualcomm’s own custom Kryo CPU cores.

From the front, the Redmi Note 5 Pro looks much like the Redmi Note 5. There are also curved sides of the 18:9 display. The phone still has the edge on the left and right sides. At the same time, the border on the top and bottom is wider. The 181-gram phone makes the phone feel a bit heavy, it is possible that this is due to a metal back and a large battery.

Gorilla Glass-equipped 5.99-inch display comes with full-HD + resolution You will not get any capacitive buttons, instead Xiaomi has used the onscreen navigation button. On top of the screen, there is a front camera, earpiece, diffused self-flash and sensor.

Body is of metal and grip is convenient. If taken in the hands, the volume and power buttons feel very far. But their response is good. Like the other handsets of the Xiaomi Redmi Note series, it also has an IR emitter on the top. At the bottom of the phone, there is a 3.5mm headphone socket, microphone, micro-USB port and speaker grill.

As per our estimation, being the Pro model, the company should have a USB Type C port in it. On the left is a hybrid dual sim tray. Here you can use a Nano SIM with two Nano SIM or MicroSD card (up to 128 GB).

On the back, there is a fingerprint sensor, dual camera setup and the Mi logo.

Redmi Note 5 Pro will give you options of 4GB RAM and 6GB RAM. The storage of both variants is 64GB only. If needed, you can use up to 128 GB MicroSD card. The phone has Bluetooth 5, Dual-band Wi-Fi 802.11 AC, GPS, FM radio, USB-OTG and essential sensors. The handset has 4G VoLTE support.

The phone’s MIU software is still based on Android 7.1.1 Nougat. It’s a matter of disappointment. The company has also said nothing about the Android Oreo update. Android security patches are not updated too. Our test unit received an update of December 2017. It is possible that this is due to the unit of beta build. In such a situation, we can not accept Xiaomi as guilty.

Custom Skin is just like the recently launched Xiaomi Redmi 5A and Xiaomi Redmi Y1. The interface is quite slick and the home screen is also quite smoother. There was no complaint of slow down the phone even in animation.

The performance of 4GB RAM variant of Redmi Note 5 Pro was the best in daily use. The screen receives lots of finger smudges, but dust and stains on the rest of the body do not stick. Call quality is good. There is ample sound from the speaker for alert and media playback. The phone is often cold. It is a bit hot even when playing a game. Even after using the camera for a long time it does not get too hot, which is a good thing.

Xiaomi has also given its music and video app for media playback. By the way, if Google’s media player is already installed, then there is no need for these apps. Apart from this, an app like Mx Player equipped with many work apps is also available for free. This phone can also play video in 4K resolution. There is also the option of audio enhancement for headphones, which can be activated from the Settings.

Xiaomi says that the cameras are one of the key features of the Redmi Note 5 Pro. Our experience is also that the camera performance is commendable. There are two sensors on the back side. The primary sensor is 12-megapixels, which is F/2.2 aperture. At the same time, 5-megapixels secondary camera is used to evaluate depth in protracted mode. The difference between human faces and background remains clear. But in other objects, it is not very accurate.

The 12-megapixel camera captures good images in daylight. The phone has a little difficulty in maintaining white balance in most of the lights, but the results are mostly accurate on most occasions. Auto-focus is slightly slow in low light. There is a problem of shutter lag, but the quality of the image is not very bad. Landscape shot distance level is fine and Noise is also limited. Colour reproduction is good in macros shot.

However, frequent auto-focus was not very effective during video recording. As soon as we switched off, auto-focus also worked fine, there is also the option of slow motion and time-lapse video that works fine in short video shooting mode for 10 seconds The video clip will be recorded, but audio quality is extremely average. Panorama mode works fine and it works to add fast frames but its manual mode is very limited, you can only control White Balance and ISO.

The 20-megapixel front camera takes the best selfie. Bokeh mode, it works well with edge detection. This is possible because of Xiaomi’s AI Learning Algorithm. This feature blurred most parts of the background of our picture in test shots, leaving a couple of parts. There is also a selfie light. It is helpful in low light. Beautification mode can be switched ON if needed. You can decide the effect level and also modify some of your facial features.

Battery life is also strong. The 4000 mAh battery of Redmi Note 5 Pro has helped us easily throughout the day. Battery supports fast charging, but the 10-watt charger provided with the handset will not do the job. We used our Qualcomm Quick Charged Power Adapter with this phone. After this, there was a notification on the lock screen which was saying that the phone is charging faster.

You can read the summary below, but the overall rating from our side is 9.

Design and performance wise, this phone is decent keeping in mind the starting price tag of Rs. 13,999. You get dual camera setup, along with a 20-megapixel front camera and 4000 mAh battery. The only con in our review is the software. We think it should come with the latest Android Oreo. 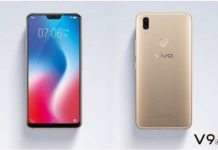 Review of Vivo V9: Is it Worth Buying?