Home News Mobile Have a Look at The Newly Launched Nokia 7 Plus Smartphone
Facebook
Twitter
Pinterest
WhatsApp
Nokia 7 Plus, unveiled in the Mobile World Congress 2018, has been launched in the Indian market. This mid-range smartphone is an upgrade of Nokia 7 which was introduced last year. It comes with Carl Zeiss brand dual camera setup. Nokia 7 Plus is made from a block of 6000 series aluminium. It has a 6-inch 18: 9 display, i.e. the bezel is extremely thin. The smartphone has Face Unlock feature and comes with Artificial Intelligence. 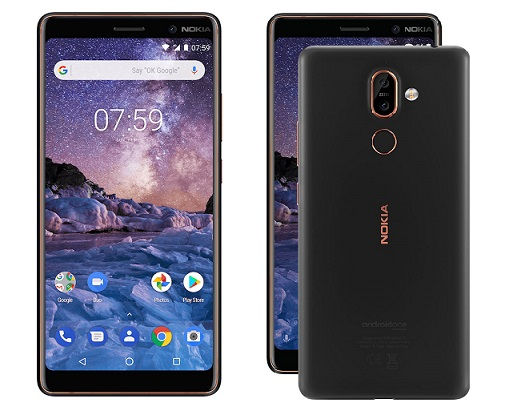 Nokia 7 Plus runs out of the box Android Oreo 8.1. Let me tell you that this is the Android One device, i.e. the regularity of Android updates is guaranteed just like the Nokia 8 Sirocco. The smartphone comes with a 6-inch full-HD+ (1080×2160 pixels) IPS LCD display. The aspect ratio of the screen is 18:9 and for protection Corning Gorilla Glass is present. The handset is equipped with eight core Qualcomm Snapdragon 660 processor along with 4GB LPDDR4 RAM.

One of the smartphone’s specialities is its camera. Two rear cameras are provided in the handset. One camera has a 12-megapixel wide-angle lens, which is equipped with F/1.75 aperture. Then there is another 13-megapixel camera, which has an aperture F/2.6. There is also an option of 2x optical zoom added. Both cameras come with dual-tone LED flash and Zeiss optics. The front camera is 16-megapixels, which is equipped with Focus F/2.0 aperture.

Also Read: It’s Not The LG G7, But G7 ThinQ is The Next Smartphone From LG

The internal storage of the handset is 64GB and if required, it can be expanded via a microSD card of up to 256GB. In terms of connectivity, it has a 3.55-millimeter headphone jack, 4G VoLTE, Wi-Fi 802.11 AC, Bluetooth V5, GPS/A-GPS, NFC and USB Type-C. The phone contains the accelerometer, ambient light sensor, digital compass, gyroscope, proximity sensor and fingerprint sensor on the rear.

The phone houses 3 mikes and 1 speaker with smart amplifier and Nokia Spatial Audio. The handset uses a 3800 mAh battery. It has been claimed that once full charge, the user will get a talk time of up to 19 hours and keep the phone on standby for 723 hours.

Price, Availability and Launch Offer for Nokia 7 Plus

ALSO READ:  Apple Announces The iPhone 8 and iPhone 8 Plus With an A11 "Bionic" Chip