Home News Huawei MateBook X Pro Now Available For Purchase Starting Today
Facebook
Twitter
Pinterest
WhatsApp
MateBook X Pro, which is touted by Huawei as the world’s first full-screen notebook and also the company’s first notebook with FullView design is now available to buy from Huawei’s online store, Vmall. There are many impressive features of MateBook X Pro, one of the highlights is the 91% screen-to-body ratio creates a nearly borderless display.

It was first unveiled at the MWC 2018 in Barcelona, and a few days back, on April 12, the product was officially launched in China. It has been priced starting at 7988 yuan ($1271). Being a top-notch device of the company it is equipped with tons of superior features which we’ll be discussing below.

Features and Specifications of the MateBook X Pro

There is a 13.9-inch screen with a resolution of 3000 x 2000 pixels and offering the pixel density of 260PPi. As mentioned earlier, it has a 91% screen-to-body ratio  Because the bezels of MateBook X Pro are narrow, the company has had to hide the front camera discreetly on the keyboard (under the F-key) and pops up only when you want it to. 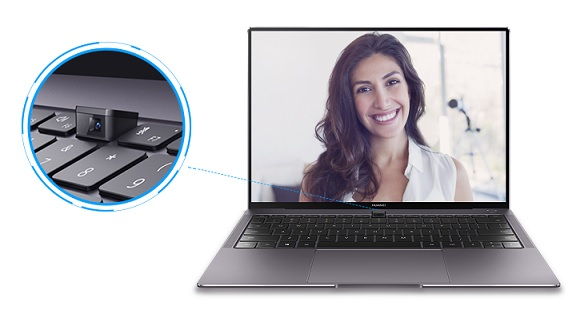 Of course, this new device from Huawei is driven by the generation Core i7 processor paired with a 16GB of RAM, 512GB SSD, and MX150 graphics card. It’s worth mentioning here that there is also a regular variant with an 8GB of RAM and 256GB of SSD with i7 processor. The Core i5 variant is also available with 8GB RAM and 256 GB storage.

If you’re worried about the heating issue of the device (which is obvious), then cool down as the company has used a negative pressure cooling cabin technology, which houses a shark fin continuously variable fan, which can intelligently switch between silent mode and high-efficiency mode.

For connectivity, there are USB Type-A, two USB Type-C, and a headphone jack. The battery in the laptop is of 57.4Wh power, which is claimed to offer a video playback up to 12 hours.

At the time of covering the news, only the Core i5 variant was available to buy.