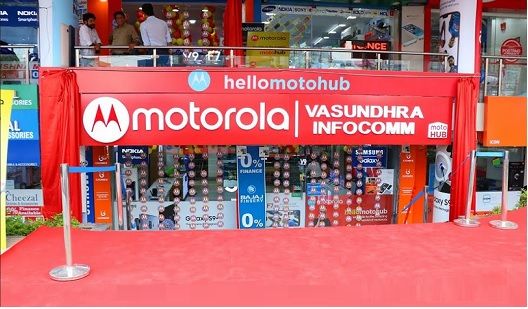 Motorola today announced further expansion of their retail presence and entered Madhya Pradesh with the opening of 60 new Moto Hubs, including 25 Moto Hubs each in Indore and Bhopal and 10 in Jabalpur. Moto Hub is a key destination that provides easy access and availability of all Motorola products to customers; where they will be able to experience the entire portfolio of Motorola devices at convenient locations including the online exclusive devices like the popular moto e4 plus and moto g5s plus, apart from the newly launched moto x4 and moto z2 force.

Sanjay Bhattacharya, Regional Sales Lead, Motorola Mobility India said, “Motorola has been expanding retail presence across the country and we are now entering the heart of India, Madhya Pradesh with our first Moto Hub stores in three of the most prominent cities – Indore, Bhopal and Jabalpur. These will offer a unique Moto experience to our valued customers. We will continue to expand our retail presence in the state and enhance the customer experience by making our product portfolio accessible to them and ensure that their varying needs are met.”

As part of the strategy to consolidate its retail presence across the country, Motorola recently advanced its retail footprint in the southern market by announcing 100 Moto Hubs across Tamil Nadu with 50 Moto Hubs in Chennai and 100 new ‘Moto Hubs’ in Karnataka across top 8 cities out of which 50 will be in Bengaluru. In addition to this, it also announced the opening of 50 new Moto Hubs in Mumbai and 25 Moto Hub stores in Kolkata respectively. Motorola commenced the year 2018, with the opening of 50 new Moto Hubs in New Delhi.

Also Read: Samsung Galaxy J2 Pro is a Smartphone With No Internet Connectivity

India to Reach 500 Mn Internet Users Milestone This June – What’s Next for India?