Home News Mobile Nokia 6 (2018) Now Available For Sale in India With Attractive Offers
Facebook
Twitter
Pinterest
WhatsApp
Sale of Nokia 6 (2018) has started in India. The smartphone is now available for grab in select retail outlets across the country. Apart from this, Nokia handset can also be purchased from the company’s own e-commerce site, Nokia Mobile Shop. This phone is available now with a lot of offers. To recall our readers, HMD Global launched the Nokia 6 (2018) this week in the Indian market. 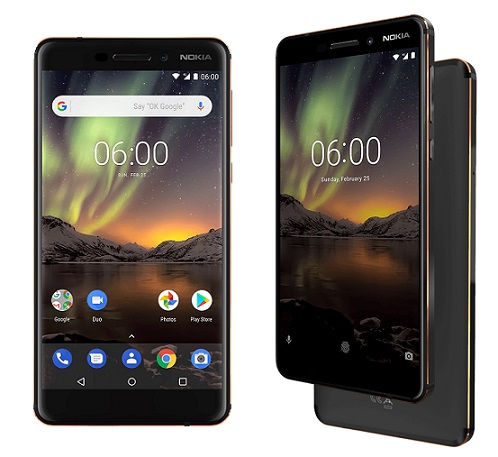 This phone was first launched in China in January. After this, Global Variants were brought in the Mobile World Congress 2018. Talking about the key feature, this smartphone is made from a block of series 6000 aluminium and it’s an Android One smartphone which guarantees the regular Android updates. Apart from this, users will also be able to enjoy the Nokia special feature on this phone.

At present, only one variant of Nokia 6 (2018) has been made available in the Indian market. This variant with 3 GB RAM and 32 GB storage can be purchased for Rs 16,999. It is expected that the company will also launch 4GB of RAM and 64 GB storage variants in the coming months. The handset will get a tough challenge from Xiaomi Redmi Note 5 Pro and Moto G5S Plus. It has been made available in Black/Copper, White/Iron, and Blue/Gold colour variants.

Customers who purchase Nokia 6 (2018) will get a cashback of Rs 2,000 from Airtel. Apart from this, free subscription to Airtel TV app will be given until 31 December. Apart from this Nokia’s phone can also be bought in an unviable EMI. By May 31, 2018, the user who buys the phone will get 5 percent cash back.
Also Read: Have a Look at The Newly Launched Nokia 7 Plus Smartphone

Nokia 6 (2018) with dual-SIM will work on Android 8.0 Oreo and as mentioned earlier this is part of the Android One program, in which some customizations and updates have been put. The smartphone has a 5.5 inch Full HD Plus IPS LCD display. The aspect ratio of the display is 16:9.
In addition, Gorilla Glass protection is also present. The 8-core Qualcomm Snapdragon 630 processor drives the phone. There are two versions of the handset, 4GB RAM/64 GB storage and 3GB RAM/32GB storage. However, currently, the 3GB RAM and 32GB storage variant have been launched in India. It is possible to increase the storage with the help of MicroSD card.
Speaking on the camera details, the 16-megapixel camera on the rear of Nokia 6 (2018) comes with Zeiss Optic, Dual Tone LED Flash and F/2.0 aperture. The front has a fixed focus sensor of 8 megapixels. It has an aperture F/2.0.
In terms of connectivity, the handset has 4 microphones and equipped with VoLTE support, GPS, Bluetooth, FM radio, Nokia Spatial technology. To power up the phone, 3000 mAh battery is given, which has been claimed to provide a talk time of 16 hours. The phone is capable of delivering standby time of 507 hours, the company claims it is.