Home News OnePlus And Marvel Studios Come Together For The OnePlus 6 Avengers Infinity...
Facebook
Twitter
Pinterest
WhatsApp
In the midst of rumours and teasers of OnePlus 6, a big news has broke out related to the device. OnePlus has teamed up with the Marvel Studios to bring a limited edition variant of OnePlus 6 based on the upcoming Avengers: Infinity War movie. 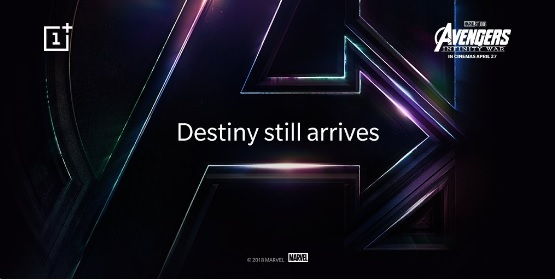 OnePlus has confirmed the news via email which was reported by the journalist Nikhil Chawla as, “We at OnePlus, the premium Android smartphone maker are partnering with Marvel Studios to celebrate its 10th anniversary with Avengers: Infinity War, which arrives in theatres on April 27, 2018.”

Avengers-themed model of the OnePlus 6 will be initially released for the Indian market, somewhat like the Star Wars variant of the OnePlus 5T. However, there is no information if/when the handset will be released in the international market, including China, US and UK.

The reason OnePlus is targeting India is that India is the largest global market for OnePlus, followed by China.

Some speculations are surfacing that the Avengers-themed OnePlus 6 will be arriving the markets in the UK this year, but they seem to be baseless.

Recently, we’ve witnessed official teasers of the OnePlus 6 revealing different aspects of the handset, such as the name of the handset, the online platform where OnePlus 6 will be sold, etc. It is also confirmed that smartphone will have a display notch, gesture control and other features.

Now let’s wait for the April 27 and see what the partnership between OnePlus And Marvel Studios has to offer.