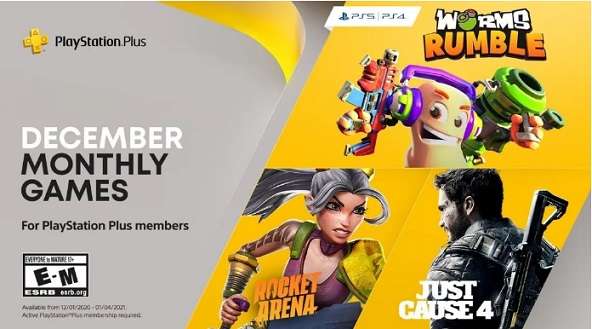 PlayStation usually offers two games for free download on PS4. But the arrival of the new generation console made the company change that policy a little. As we saw earlier, November’s PS Plus featured two titles for the PS4 and one exclusive for the PS5.

The December list, however, will feature three free downloadable games for both PlayStation 4 and PlayStation 5. With that, after the removal of Hollow Knight: Voidheart Edition and Middle-earth: Shadow of War – the November games – the catalog will have free availability of Worms Rumble, Just Cause 4, and Rocket Arena

All games under PS Plus December Bonus will be available to play from Tuesday, December 1 until Monday, January 4. Without further ado, let’s get to know each of the titles that reach PS Plus subscribers in December.

Not only the PS Plus members, but Sony also said that non-PlayStation Plus members who own PS4 or PS5 games with active online multiplayer modes or features will be able to try them out for a limited time next month.