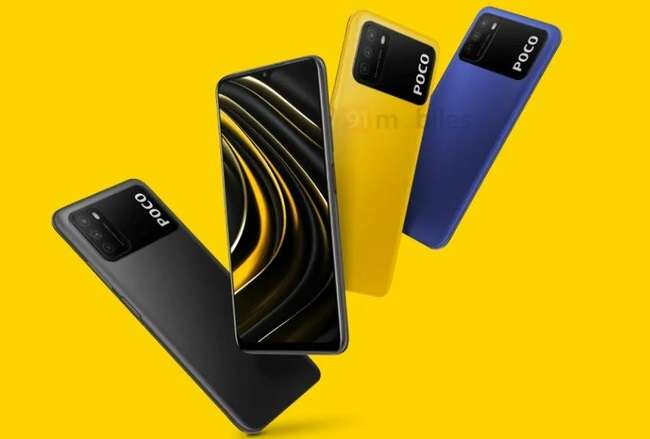 Soon after we got the confirmed launch date of the Poco M3, a leaked Poco M3 render have emerged revealing the complete design of the handset. This upcoming device has been the subject of some leaks in recent weeks. Revealed by the tech website 91mobiles, we see that the mid-range smartphone will adopt an unattractive screen, maintaining the pattern of the thick lower edge and waterdrop notch.

In the Poco M3 render above, we can see that the phone will arrive in three colors: dark gray, yellow and blue, but all with a camera module with three sensors and a black region that stretches across the top of the smartphone, positioning the logo on the right side.

According to rumors, the Poco M3 will be released with a 6.5-inch screen and Full HD+ resolution display, Snapdragon 662 processor, 4 GB of RAM, and three rear cameras with a 48MP main sensor. The base model is likely to be offered with 64 GB of storage.

The Poco M3 should be presented as the international version of the Redmi Note 10 4G, a Redmi model that will be launched in China soon. With an event already scheduled, the Poco M3 will be presented by the Xiaomi subsidiary in Europe on November 24, next Tuesday. Pricing and more details about the specifications have not yet been revealed.

Shahadat Ali - January 12, 2021 0
© Tech Carving - Tech Carving Network
We use cookies to ensure that we give you the best experience on our website. If you continue to use this site we will assume that you are happy with it.Ok