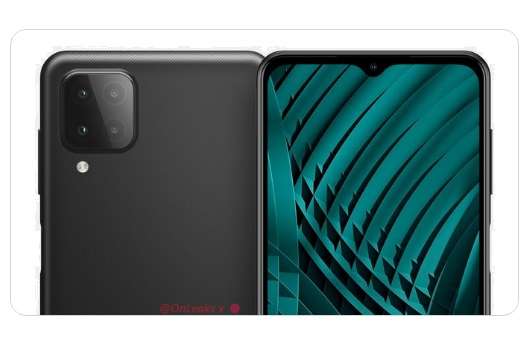 It is almost certain that Samsung is preparing to launch a new device in the M-series, the Galaxy M12. The device went through certification bodies showing a generous 7,000mAh battery and even had its back cover disclosed in real photos with a very peculiar design, reminiscent of old models of the Google Pixel line.

Now, in the latest leak renders we can see the phone from the front and rear. Courtesy of leaker Steve Hemmerstoffer, best known for his Twitter profile @OnLeaks, we had the opportunity to see the finished design of the Galaxy M12 through renders. The images reinforce the aspects seen in previous leaks, indicating strong similarity in terms of design with the recently announced Galaxy A42 5G.

The front panel, which should house a 6.5-inch display with HD + resolution, has a camera housed in a drop-shaped notch and a pronounced chin, but without major news. Meanwhile, the back is the biggest highlight, with two textures: the top has matte material and striped texture, while a small area at the bottom has a smooth texture and shiny material. Considering its position as an entry model, its rear must be made of plastic.

In addition to the different rear panel, another point of difference between the M12 and Galaxy A42 is the presence of a fingerprint reader on the power button on the side, which is found under the screen on the A42. Finally, Steve also released the dimensions of the new cell phone, which comes with 163.9 x 75.9 x 8.9mm (10mm considering the camera module).

Unfortunately, there are still no details on technical specifications of the Galaxy M12, but considering the certifications and a large number of leaks it has been leading, it should not be long before official news is released, or even for the device to reach the market.