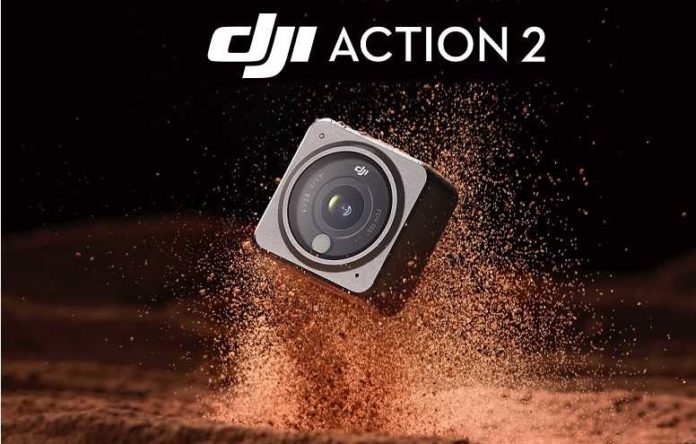 DJI continues to expand its camera portfolio with solutions that meet the requirements of different audiences. Last week, for example, Ronin 4D was announced, its new professional camera with LiDAR and 6K recordings. Now it launches the DJI Action 2 camera. It’s a successor action camera to Osmo Action that promises to improve the images captured during extreme sports.

The new model brings a totally different look, improvements in video capture, and new features. It focuses on offering a modular design that, through magnets, allows the integration of various accessories that enhance your user experience.

The main camera module is relatively small and includes a 12MP sensor supporting 4K recordings at 120 FPS. Its lens provides a wide 155º field of view.

The camera has a touchscreen with OLED technology and is protected with Corning Gorilla Glass. With magnetic technology, it is possible to install an additional screen with extra microphones, external battery, support headband, tripod, and other compatible accessories.

At just 53 grams, the Action 2 doesn’t shy away from features lacking in competitors, like 32GB internal memory expandable with a Micro SD card. Other features include digital stabilization, horizon leveling, color temperature detection, water-resistance up to 10 meters deep, and streaming support.

It is worth noting that this camera can be considered a mid-range model when compared to the recently released Hero 10 Black from GoPro. Despite having the same recording capacity, the rival model can reach 5.3K at 60 FPS. Furthermore, its slow-motion mode supports up to 240 FPS at 1080p while the GoPro has the same fluidity with a 2.7K resolution.

ALSO READ:  Samsung Galaxy J2 Pro is a Smartphone With No Internet Connectivity, Launched in Korea

The DJI Action 2 power combo can be purchased for USD 399, a competitive price in its segment. The camera comes with a power module that extends its autonomy to 180 minutes of recording, a stand, and a strip that lets you use the device as a necklace.