The Galaxy A22 5G is expected to be the next affordable phone from the brand compatible with the 5G network. Recently, we saw the renders of the handset, and the device also received WiFi certification. The model should also have a variant that has up to 6 GB of RAM. Now the phone passes through the TÜV SÜD Certification, and this has been confirmed thanks to the SM-A226B/DS numbering.

According to the regulatory agency, the smartphone supports 15W fast charging. As expected, the other specifications were not published in the available form. See below: 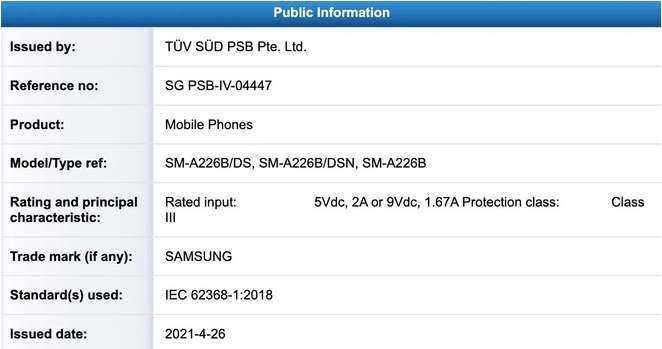 For now, Samsung has yet to reveal the release date of the Galaxy A22 5G. Anyway, previous rumors have already brought all possible specifications of the smartphone. So, we know that we are talking about a phone that has a 6.5-inch Infinity-V screen.

In addition, tests on the Geekbench revealed that the phone has a MediaTek Dimensity 700 processor and that it works in conjunction with 6 GB of RAM and Android 11. The main rear camera must have 48 MP, while the expected price of Galaxy A22 5G in India is Rs. 13,425.

Yesterday, we shared that Samsung is working on another budget phone, the Galaxy F22.