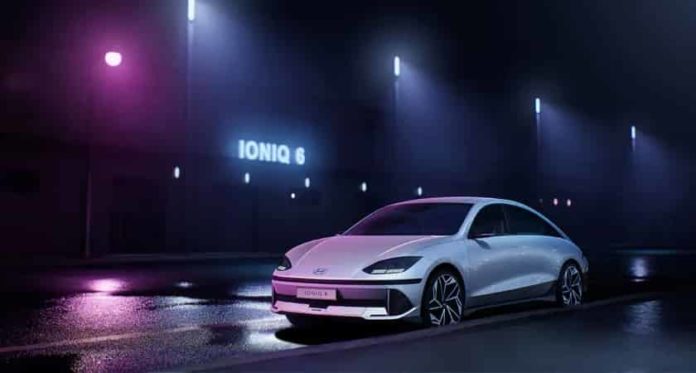 Hyundai is introducing the new generation of the award-winning Ioniq 5, the Hyundai Ioniq 6. The new model arrives with an updated, bold and efficient design with a drag coefficient of 0, 21 to go head-to-head with the Porsche Taycan and Tesla Model 3.

A neat detail is a black line on the front and rear of the vehicle, which is used to integrate the smart steering sensors into the design and also indicate the charge level of the Ioniq 6 when it’s connected.

“IONIQ 6 connects an emotional convergence of functionality with aesthetics. The distinctive streamlined design is the result of close cooperation between engineers and designers, with obsessive attention to detail and customer-centric values at the core. We have created the IONIQ 6 as a mindful cocoon that offers a personalized place for all.”

Speaking of lights, the Ioniq 6 has 700 parametric LEDs that are responsible for the signaling and headlights of the tram, which is also debuting the new Hyundai logo, which is also present on the steering wheel with 4 square dots representing the morse code for the letter H.

Inside, the Ioniq 6 has a similar look to the Ioniq 5 with two 12-inch screens that work-integrated over the air vents on the car’s dashboard. In the center, we find a central console with several controls for various functions and also storage spaces for cups, bags, and other items.

Here comes an important point: Hyundai is focusing on making its cars more ecological, as the fabric of the seats is recycled PET plastic painted with vegetable paints and carpets made with recycled fishing nets.

Speaking of engines, the Ioniq 6 has a rear-wheel-drive engine as standard, but an all-wheel-drive option will also be available. The platform is the E-GMP which is also present in the Kia EV6 and Genesis GV60.

More details of the Ioniq 6 will be revealed in July during the Busan Auto Show, but the electric will be available for purchase in the US in 2023.