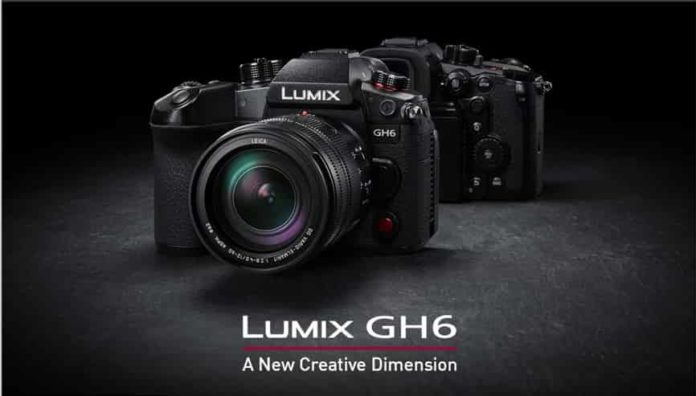 Panasonic Lumix GH6 is announced as a flagship model under the LUMIX Mirrorless Camera System. Its new hybrid camera focuses on vloggers and movie enthusiasts. Its production started shortly after the launch of the Lumix GH5 II, and it is finally reaching the international market with advantageous enhancements to its recording capability.

The Lumix GH6 has a new 25.2 Megapixel Live MOS sensor with improved read speed and dynamic range, as well as Dual ISO. The component is allied with the Venus Engine, an image processing engine developed by the Japanese multinational which, according to itself, has twice as much power as the resource of the Lumix S1H.

The maximum video recording resolution, by the way, is close to the 5.9K of the Lumix S1H — it’s 5.7K with a maximum fluidity of 60 FPS in 10-bit anamorphic (4:3) mode. The frame rate jumps to 120 FPS in 4K recordings and 240 FPS in Full HD. This is all supported by the sensor’s effective 5-axis IBIS stabilization.

One of the big news of the new generation is the Apple ProRes 422 codec. One of the new low compression standards supported that will be incremented with a future firmware update promised by Panasonic, in addition to a new simultaneous image output via HDMI in 4K at 120 FPS and direct recording to SSD via USB-C.

For maximum video quality, the camera will feature 4-channel audio recording at 48kH — scalable to 96kH with an XLR adapter — via ProRes and MOV modes. Stills should also benefit from the factory-installed V-Log flat image feature, applying real-time gamma conversions.

There is a 3-inch touch-sensitive screen that allows for real-time preview of recordings. In terms of connectivity, the Lumix GH6 supports both Wi-Fi and Bluetooth. You can pair the camera with your smartphone — Android or iOS — via LUMIX Sync to remotely control recordings and transfer files.

Finally, its robust design is advertised as resistant to certain conditions, including splashes of water and dust, while still offering a compact and lightweight size. Of course — for more extreme conditions, action cameras are better suited.