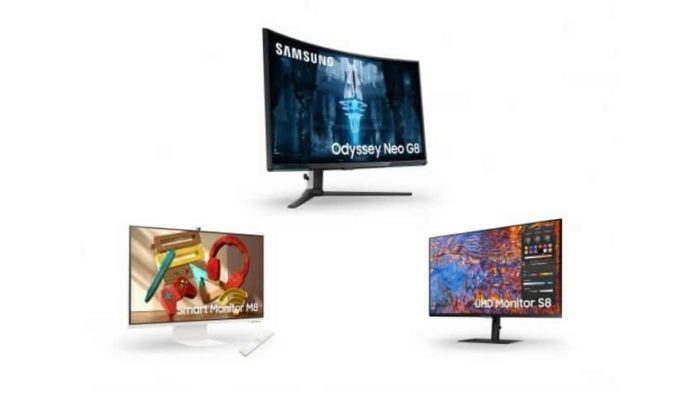 Among the many innovations announced by Samsung at the CES 2022 in Las Vegas, there are also monitors. With the new series of monitors, the Korean tech giant is planning to tackle this year with the aim of confirming itself as one of the most important companies in this sector as well. The company announced a total of three monitors: Samsung Odyssey Neo G8, Smart Monitor M8, and UHD Monitor S8.

The most interesting model of the new generation of Samsung monitors is represented by Odyssey Neo G8. The first in the world to be able to boast a curved 4K (3,840 x 2,160 pixels) 1000R screen with a refresh rate of 240 Hz and a response time of 1 ms.

With a panel with Quantum Mini LED technology and capable of guaranteeing a brightness of up to 2,000 nits, Odyssey Neo G8 represents, according to the Korean giant, a solution capable of offering exciting performance even for the most demanding PC players.

Built with a design language similar to that of the Odyssey Neo G9, Samsung’s new monitor can rely on special technologies (such as CoreSync lighting) that have been designed to create a deeper sense of immersion.

The second model announced by Samsung is the Smart Monitor M8. It has an ultra-thin thickness of 11.4 mm is about three quarters thinner than its predecessor.

Finally, Samsung has also announced High-Resolution Monitor S8, which will be available in 27-inch and 32-inch versions and will be able to count on a 4K panel with 98% DCI-P3 color gamut.

Among its other features, we find a Matte Display protection (to reduce light reflections), a USB Type-C port that allows 90 W charging connections, LAN ports to create a workstation, and compatibility with VESA standards.

“Samsung’s 2022 lineup represents the next generation in monitor innovation with offerings that meet the demands of competitive gamers, professional designers and everyone in between,” said Hyesung Ha, Executive Vice President of Visual Display Business at Samsung Electronics. “As the work and entertainment worlds continue to evolve, we are proud to deliver monitors that boost users’ experiences from the comfort of their homes.”