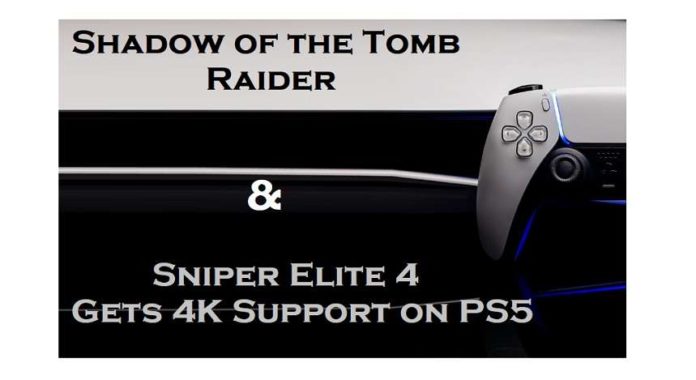 While Microsoft has been adding more and more titles that take advantage of the FPS Boost feature, such as Dark Souls 3, Sony has also been receiving older titles that have received this kind of enhancement. This week, we found out that Shadow of The Tomb Raider and Sniper Elite 4 now run at 4K and 60fps on PS5.

Through the 2.01 update for Shadow of the Tomb Raider, Square Enix now allows for better graphics quality for those who play the title on PS5. When playing in backwards compatibility mode, users will have access to graphical improvements for free, as long as the game is updated.

As for Sniper Elite 4, the PS4 version of the game also received improvements for those who play it in backwards compatibility mode on PS5. The free update also includes faster loads, thanks to the use of Sony’s new console’s powerful SSD.

When asked whether the free update is also valid for those who have redeemed the game on PS Plus, the game’s official Twitter account confirmed that it is. That’s a relief, given that games like Greedfall and Final Fantasy VII Remake didn’t offer the free next-gen upgrade to those who redeemed the games on Plus.

It will be yes.