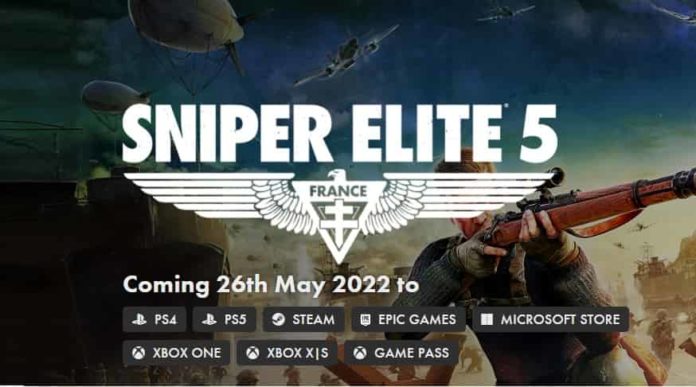 Rebellion announced late last year that Sniper Elite 5, the new installment of its war action game, would arrive sometime this year. Now the company has confirmed May 26th as the release date for the title. The pre-order is now open for PS5, Xbox Series X/S, Game Pass, PS4, Xbox One, and PC.

Along with the announcement of the release date, a new trailer for the game has also been revealed with details of the new adventure of Karl Fairburne, an elite sniper who this time will have to travel to France in 1944 after discovering Operation Kraken, a Nazi plot that will turn the tide of World War II: “Karl will have to use all his skills to gather as much information as possible about these plans and make sure they never come to fruition. This will pit him against the mastermind of the plot, Abelard Möller, an Axis General who must be stopped at all costs”, can be read in his official description.

Operation Kraken must be destroyed.

In addition to the new trailer, Rebellion today also shared information about the Deluxe Edition of Sniper Elite 5, a version that in addition to the base game also includes a season pass with access to a two-part campaign that will be published after the launch of the game.

It will consist of extensive maps in which we can play with an expanded arsenal with six weapon packs and two weapon skins, two-character packs, and two campaign missions.

Additionally, those who pre-order either of the two editions of Sniper Elite 5 will be able to receive “Wolf Moutain”, the final mission of the ‘Target Führer’ campaign, in which players can infiltrate Adolf Hitler’s private mountain retreat to take down your life in the most creative way possible.