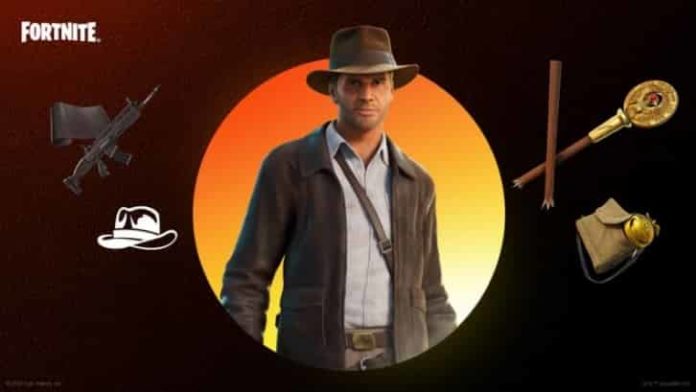 Indiana Jones Skin in Fortnite is released. In early June, we had the release of Chapter 3 of Season 3 of Fortnite. Since then, we’ve known that the highlights of this chapter’s season pass would be the skins of Darth Vader and Indiana Jones, two of Lucasfilm’s biggest franchises.

This week, quests that give access to Indiana Jones skin and other items have finally been released.

Through Season Passes, Fortnite players can unlock a number of cosmetic items using the stars earned by leveling up.

In addition to these contents unlocked with stars, the pass also offers content unlocked by missions and the ball of the moment is Indiana Jones. Epic Games announced this week the missions needed to access content from the world’s most famous archaeologist.

Complete the Tasks on Page 1 below (in whichever order you prefer) to unlock the Indiana Jones Outfit!

SCROLL 5 CHESTS IN MATREIRAS MINES
Turn left into the tunnel. No, the tunnel ON THE LEFT! Unlocks an Indiana Jones Banner.

DEAL 500 DAMAGE TO OPPONENTS WHILE DRIVING OR STANDING IN A VEHICLE
It’s about mileage, not age. Unlocks the Armed Archeology Wrap.

USE THE HARPEU GLOVE TO SWING ON THE TREES 10 TIMES
You can fly, right? Unlocks the Lost Relic Pickaxe.

COLLECT THE DURRR BURGER RELIC IN THE TEMPLE AND RUINS IN A SINGLE PLAY
It should be in a museum. Unlocks the Expedition Bag Back Attachment.

Completing all of the Tasks on Page 1 will unlock Page 2 of the Indiana Jones Tasks!

Complete the Tasks on Page 2 below (in whichever order you prefer) to unlock the Indiana Jones Outfit Temple Explorer Style!

FIND THE SECRET DOOR AFTER THE MAIN CHAMBER IN THE SHREDDED ALTARS
Relax, there are no snakes. Unlocks the built-in Shake Dust Emote from Indiana Jones Outfit.

STORE A MYTHICAL OR EXOTIC ITEM IN A TENT
Time to pursue fortune and glory. Unlocks the Indiana Escape Spray.

MAKE UNSTABLE BOULDERS ROLL 100 METERS IN A SINGLE PLAY
Do you call THAT archeology? Unlocks the Dr. Jones.

DEAL 750 DAMAGE TO OPPONENTS WITH A
“Trust Me” PISTOL. Unlocks the First Misadventure Loading Screen.

BE IN THE BEST 5 IN A MATCH
You’ll find a way in time. Unlocks the Emergency Drift Glider.