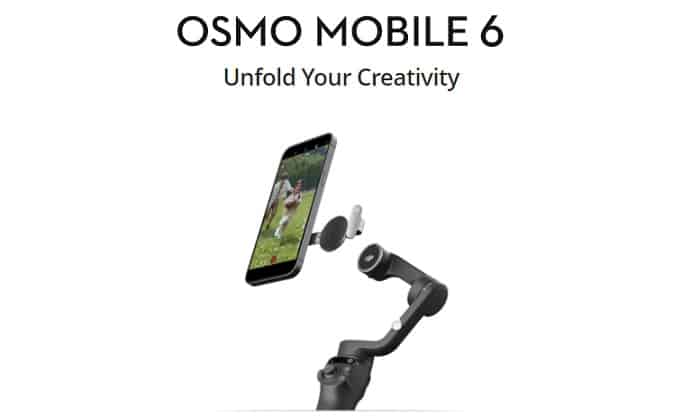 DJI has announced its sixth smartphone gimbal, the DJI Osmo Mobile 6. It includes a screen, a zoom wheel on the side, and the fact that the old name returns.

Where the previous gimbals were called OM4 and OM5, DJI calls the new gimbal Osmo Mobile 6. The gimbal has a status screen to quickly adjust the mode of the video, among other things, without having to look at the smartphone screen. It also shows the battery status, something that happens with LEDs in previous versions.

In addition, there is a scroll wheel on the side for easy zooming in and out. That happens on predecessors with a button. Also new is the iOS feature that automatically opens the DJI Mimo app to the camera mode when users connect the phone via the magnets. That works from the iPhone 12 and is not available on Android. The function should make the gimbal ready for use faster.

Osmo Mobile 6 is an intelligent smartphone stabilizer packed with creative features. It’s not only compact and easily foldable to fit in your palm, but also launches automatically once unfolded to capture shots at a moment’s notice. Get dynamic angles and perfect selfies by using the built-in extension rod. A whole host of intelligent functions and guides are at your disposal. The DJI Mimo app facilitates efficient shooting, editing, and sharing, allowing you to catch every unforgettable moment.

The gimbal is for making smartphone videos more stable. DJI has been releasing a new version of the gimbal every year for several years now.

The Osmo Mobile 6 is now available to buy for USD $159. The company notes that “Due to limited new product availability, each customer can only purchase 3 units. Additional orders purchased after 3 units will be canceled.”